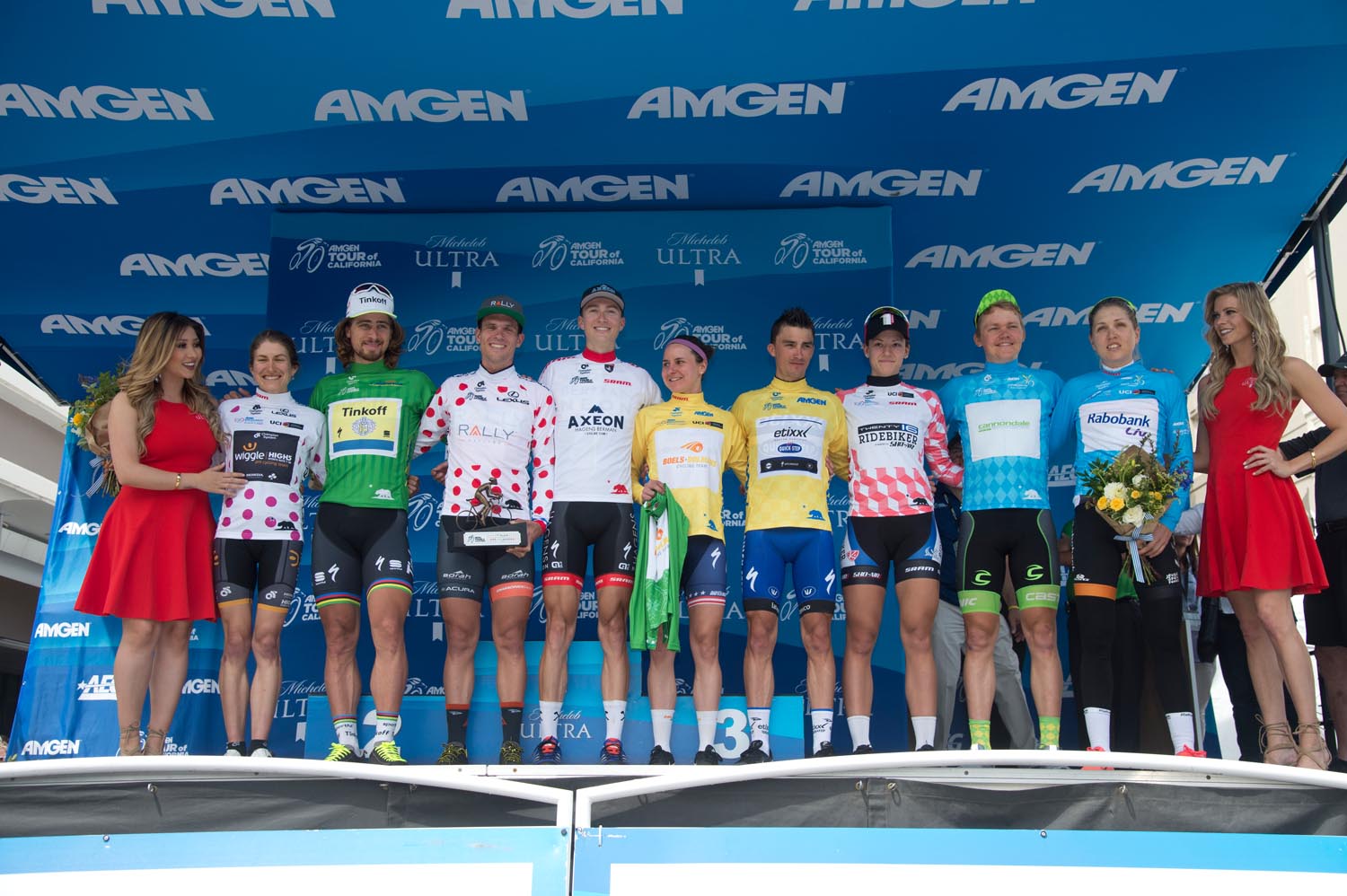 Evan Huffman crossed the finish line in Sacramento today clad in the polka dot jersey of the 2016 Amgen Tour of California King of the Mountains. The jersey is the accumulation of Huffman’s passion, dedication and determination. It also stands as a testament to the teamwork that is the foundation of Rally Cycling. In addition to the KOM jersey, Rob Britton finished an impressive 11th overall while the women’s team showed its strength and perseverance.

“It is great to win the King of the Mountains jersey,” said Huffman. “It is a special thing to win a classification jersey at a major event like the Amgen Tour of California. Being able to do it in my home state with my friends and family here is amazing. The team was incredible all week. The KOM competition was one of our goals and once I had the jersey the team defended it perfectly. Will (Routley) got in the break on stage four and got most of the KOM points – and then Adam (De Vos) did it again on stage five. In stage seven the other teams made a play for it, but Danny (Pate) made a heroic effort and bridged me up to the break and in a position to defend my jersey. Without my teammates I would not have the jersey.” 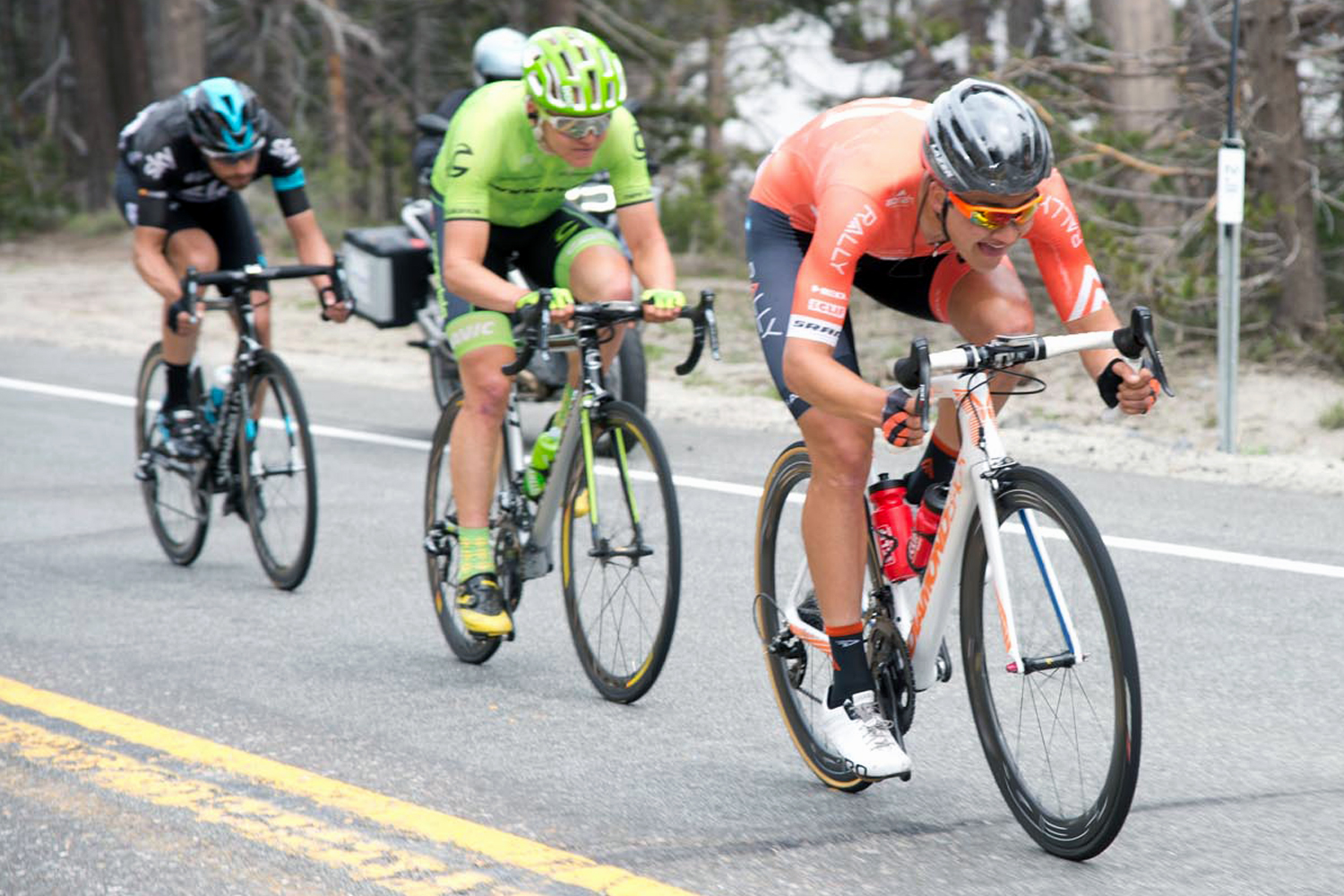 Huffman’s reign in the King of the Mountains jersey began on Monday’s second stage from South Pasadena to Santa Clarita. Huffman was part of a daylong breakaway with Ben King (Cannondale). Huffman won three of the day’s KOMs, giving him the jersey, and finishing second on the stage. The next day, en route to the stage three mountain top finish on Gibraltar Road, Huffman again made the day's breakaway, to scoring more points and increasing his lead. It was also here that Britton rode to an impressive 11th place, laying the foundation for his high overall finish in Sacramento.

In stage four Routley joined the day's escape and took maximum KOM points to defend Huffman's lead. A tough finish onto the Laguna Seca Raceway in Monterey brought Britton home in ninth, moving him up to ninth overall. Stage five saw an 18-man move form, with De Vos covering it for Rally Cycling. As Routley did the day before, De Vos took most of the KOM points on the road to South Lake Tahoe to defend Huffman's jersey. De Vos’s efforts led to a split in the breakaway that saw him, Tom Skujins (Cannondale) and Xabier Zandio (Sky) go clear. On the final climb, De Vos marked Zandio and Skujins coming into the final corner before launching his sprint. He quickly got a bike length on his two breakaway companions but was unable to fend off Skujins, who came by on the outside to take the win. 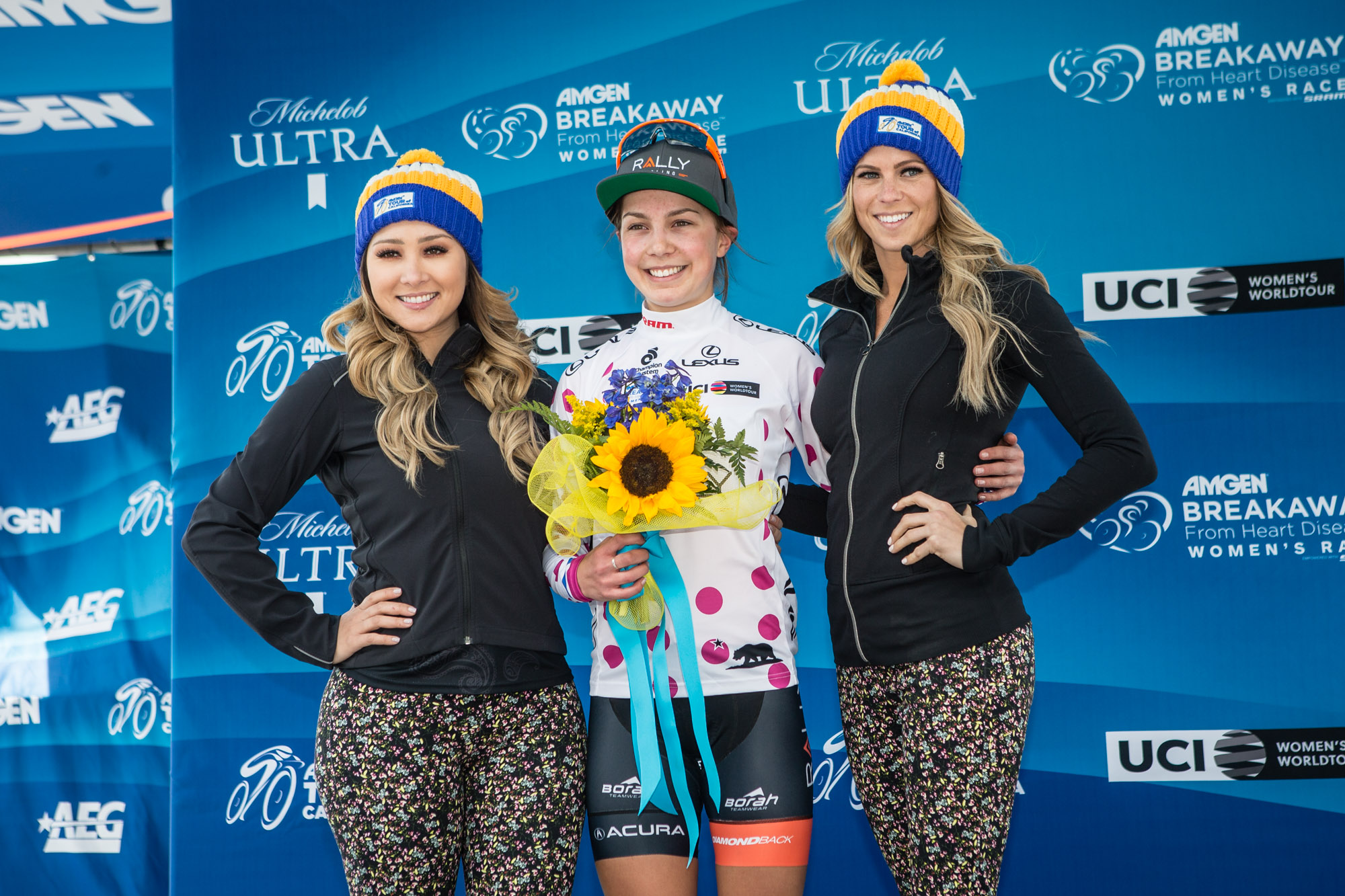 South Lake Tahoe also saw the start of the women’s event. Sara Poidevin again showed that she is one of the top climbers in the peloton by grabbing the first Queen of the Mountains points of the race. With only two categorized climbs on the 72-mile route, Poidevin was well placed to take the polka dot jersey at the end of the day. On the final climb to the finish Poidevin was gapped from the front group and finished in 21st place. Crossing the line first, Megan Guarnier (Boels–Dolmans) took the win and the KOM points – moving her into a tie for the lead in the QOM competition. As the winner of the stage Guarnier claimed the leader’s yellow jersey with Poidevin taking the QOM jersey.

The stage six time trial brought a truce to the fight for the KOM while the battle for the general classification raged on. Rob Britton put in a solid performance to finish 27th on the day, slipping to 11th overall. On the same course, the women’s second stage began, a 20.3 kilometer team time trial. The Rally Cycling women, reigning National Team Time Trial Champions came into the stage with high expectations and started fast, but a touch of wheels 7 kilometers into the stage sent four riders to the ground. The worst off was Kirsti Lay, who landed hard on her back, forcing her to abandon the race. Sara Poidevin was one of the riders to go down and struggled to remount. She would eventually finish outside the time cut and was eliminated. After inspection from team doctor Kelby Bethards, Lay was diagnosed with no serious injuries. 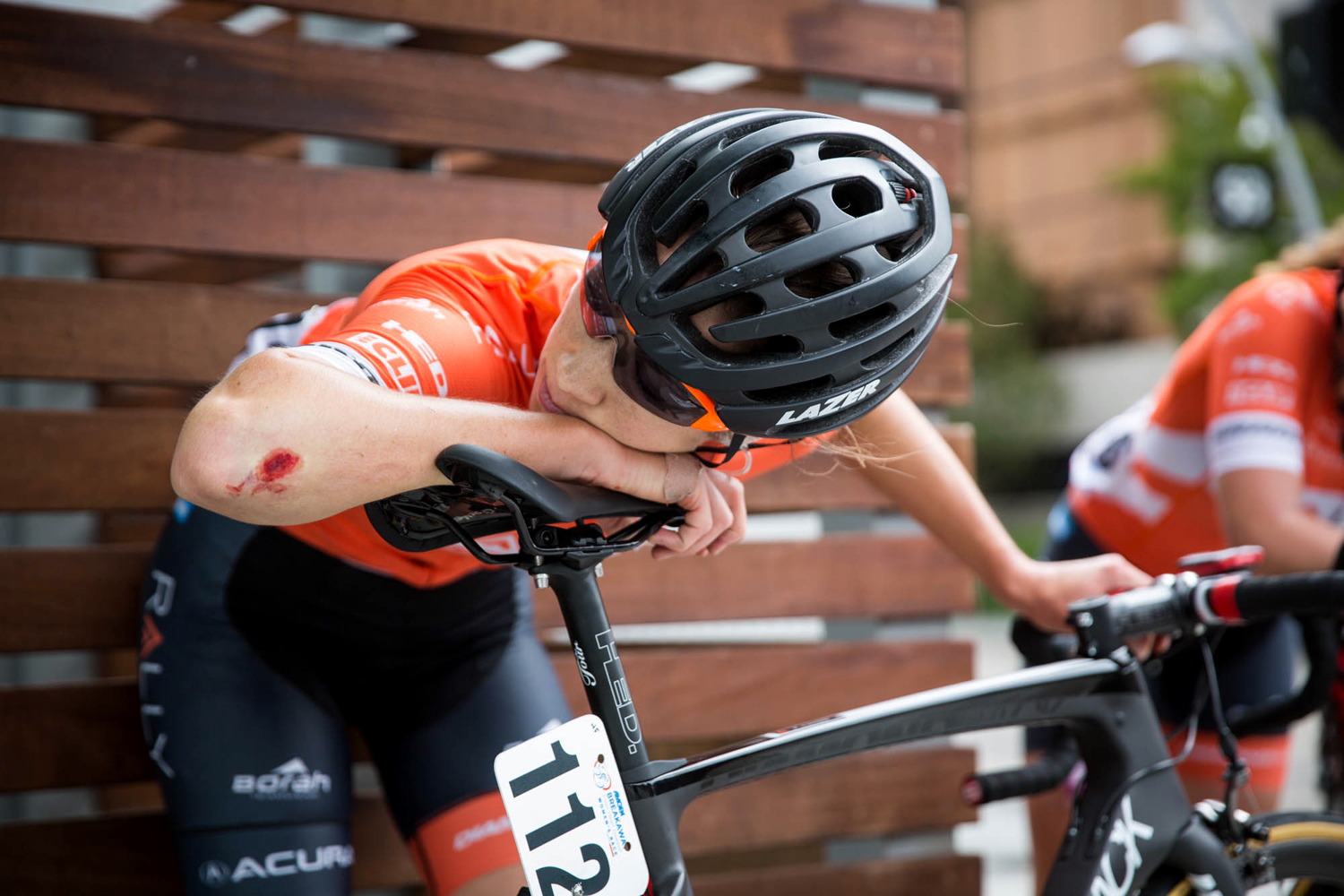 Stage seven began with a bang, featuring several early breakaway attempts over the first category 3 climb, won by Peter Stetina (Trek/Segafredo). Stetina, a threat to Huffman’s KOM jersey, forced the team onto the defensive. Up the next climb, a category 1, Rally Cycling mounted a furious chase. With the chase on, Huffman and Danny Pate, who had bravely returned to the peloton after a violent early race crash, smartly jumped across a growing gap that could have permanently altered the KOM contest. Pate towed Huffman across to the front group, and Huffman then locked down the KOM jersey once and for all, with first-place points over the top of the ensuing category 1 and 3 climbs.

“I just knew that if we caught the front group, Evan would kind of be by himself,” said Pate of the savvy tactics he employed. “I knew that we were riding with Quick-Step lined up behind us, so anyone that wanted to come with us was already 50 or 60 feet back. It was the perfect time to jump up the road and bridge across. It was just instinct from doing so many races before – it was just a good time to go.”

As Pate and Huffman were busy consolidating the KOM jersey, the women’s team was on the streets of Santa Rosa, riding aggressively and putting the events of stage two behind them. The squad fought back with Heather Fischer finishing 7th and Emma White, still recovering from mono and completing a college education full-time, showing her potential with a 12th place finish. In the final stage through the streets of Sacramento, the podium was again elusive, but the women of Rally Cycling left California showing class and perseverance – the hallmarks of a great team. 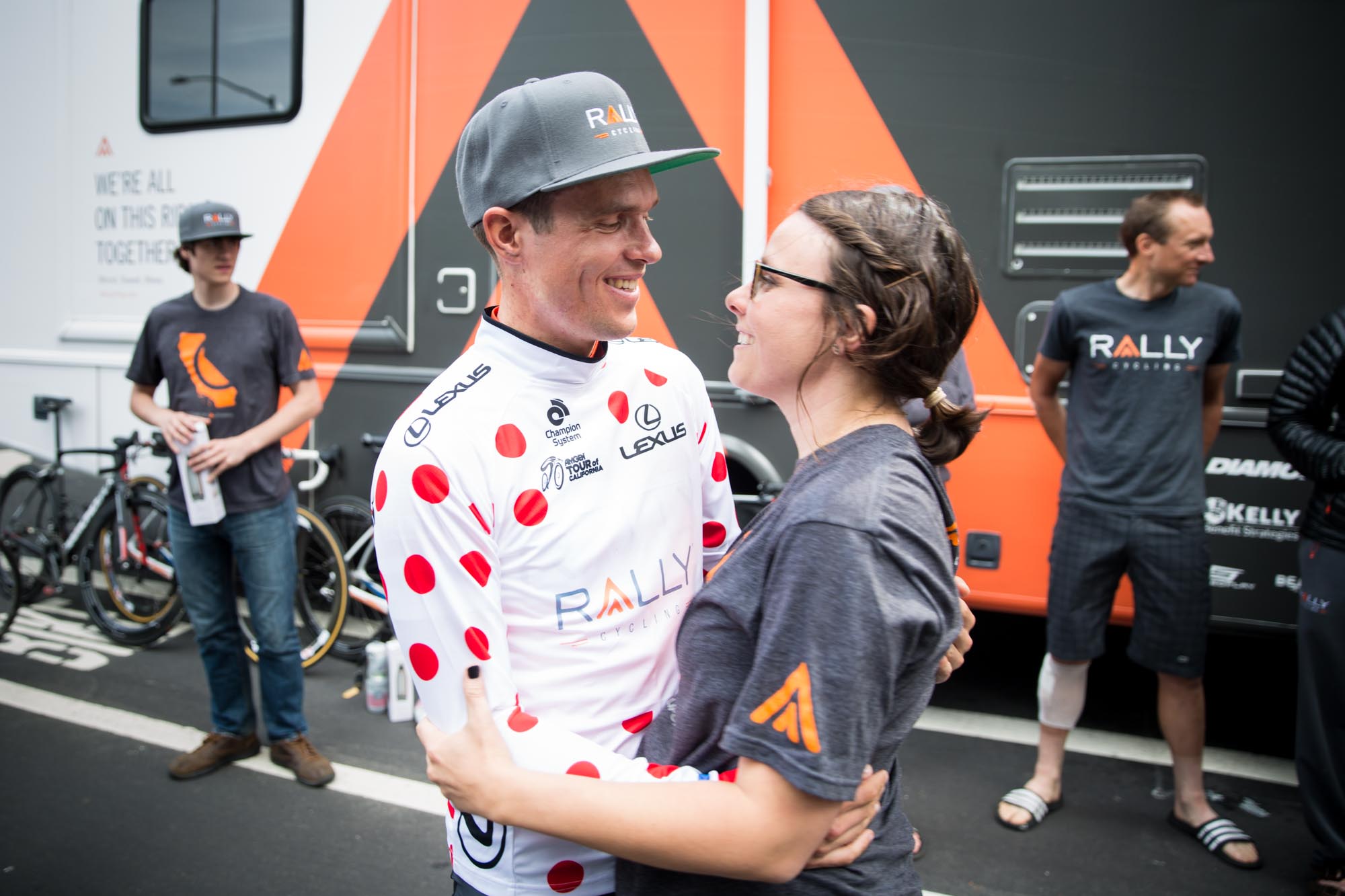 The 2016 Amgen Tour of California wrapped up with the men’s race completing the 138-kilometer final stage in downtown Sacramento. Not satisfied with the King of the Mountains jersey, Rally Cycling again went on the attack with Emerson Oronte infiltrating the day’s breakaway. The break worked well together, but with the flat profile, the sprinter’s teams gave chase and the break was reeled in with less than three kilometers to go. The day would go to Mark Cavendish (Dimension Data). Rob Britton crossed the line safely inside the peloton to maintain his 11th place on general classification.

Rally Cycling will look to continue its California success next week at the USA Cycling Professional Road Race and Time Trial National Championships in Winston-Salem, North Carolina, May 27 – 28. The Road Race is in the crosshairs for Danny Pate, who has narrowly missed victory in the prestigious road race championship several times and will attack it with the full strength of his Rally teammates behind him. 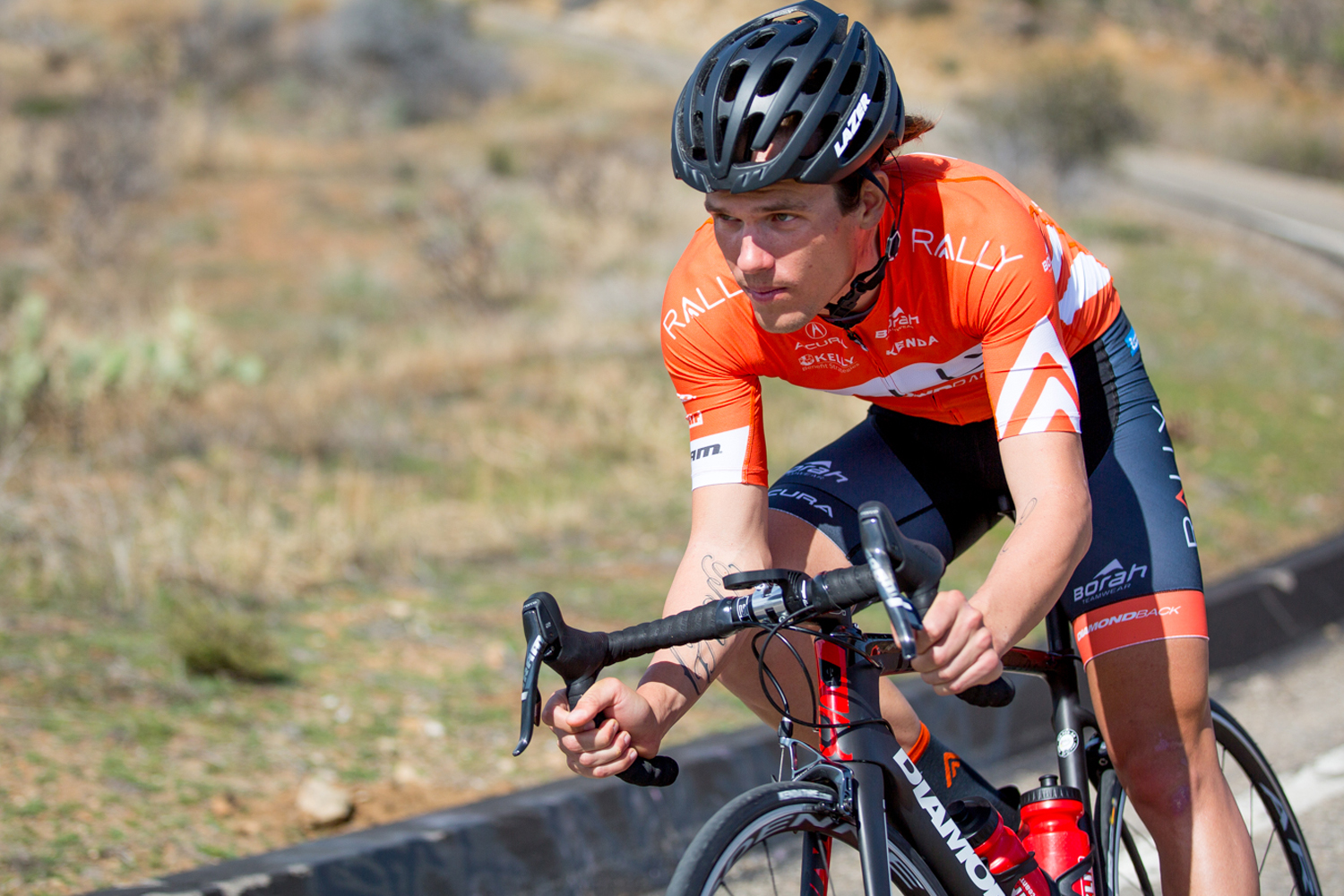 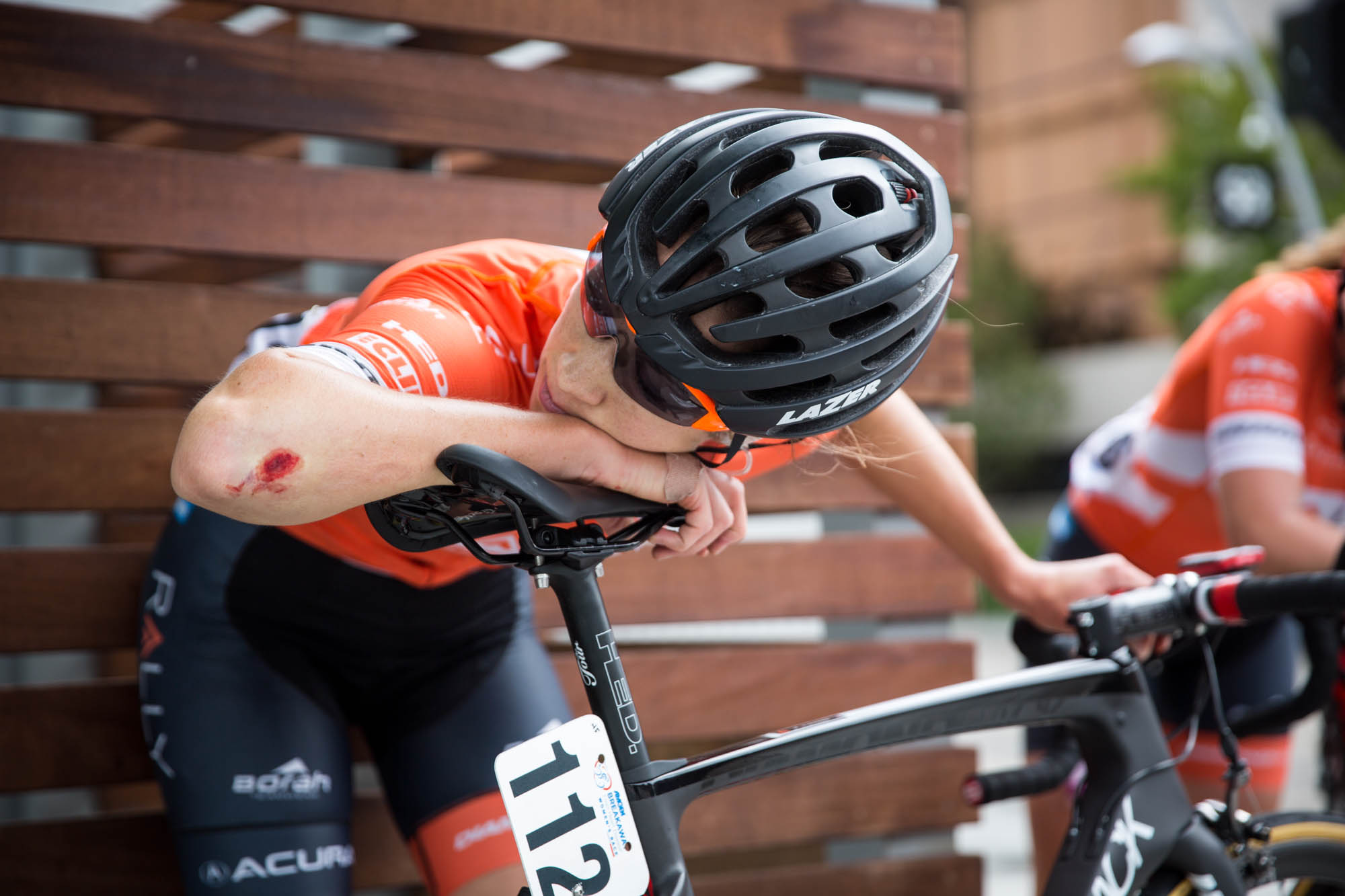