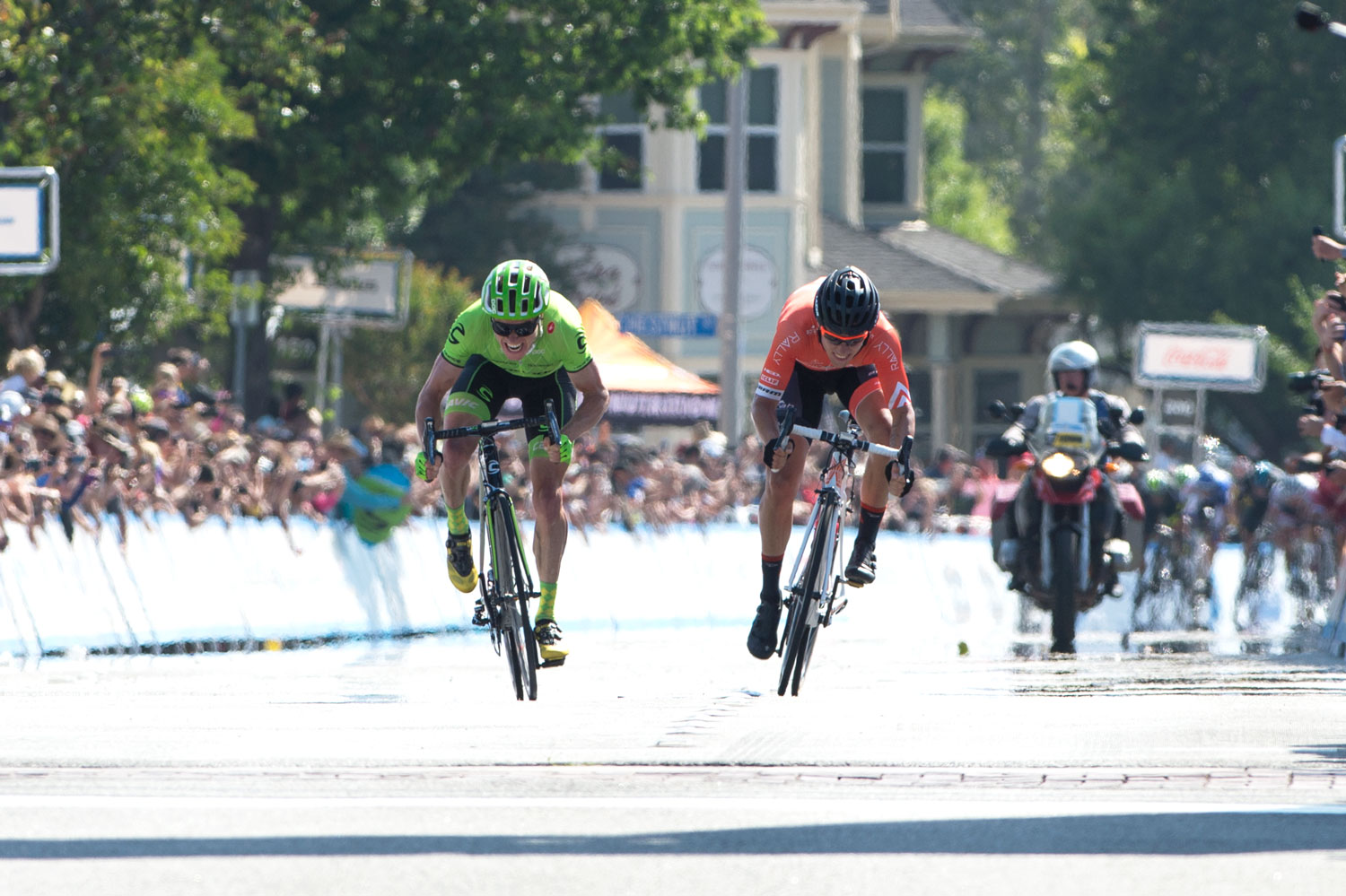 Evan Huffman continued his stellar season with a second place finish in stage two of the Amgen Tour of California. En route to the podium, Huffman claimed the King of the Mountains jersey and moved into second place on the general classification.

“One of the goals of the day was to get in the break and get the KOM jersey,” said Huffman. “Once in the break I just tried to wait until the last 200 meters on the climbs and sprint. Ben (King) was close on the first two KOMs but I was able to edge him out. On the last one, he kind of let me have it. It’s great to have a jersey and a podium in my home state.”

The day started with a rapid pace out of downtown South Pasadena. On the first climb of the day a break of 22 riders distanced themselves from the peloton. The break contained Rally Cycling riders Jesse Anthony and Adam De Vos. With most of the general classification riders on the wrong side of the split, the peloton chased hard and the race came back together just before the first KOM at the top of Los Angeles Hwy. In the sprint for the first KOM, Julian Alaphilippe (Etixx-Quick Step) crossed the line first.

Once over the top of the first KOM, Huffman, King (Cannondale), Sindre S Lunke (Giant) and Will Barta (Axeon Hagens Berman) went clear and quickly established a gap. The gap quickly grew, topping out at 7:30. With a comfortable margin on the peloton, the fight for the King of the Mountains took center stage. The second KOM of the day was at the top of Upper Big Tujunga Canyon Road. In the sprint for the line Huffman edged King with Barta and Lunke taking third and fourth. As the fight for the KOM raged, the peloton slowly started to eat into the quartets lead and by the start of the final two category climbs of the day the gap was down to just 3:30.

On the run up to the third KOM, Lunke was dropped, leaving Huffman, King and Barta to continue the fight. Despite a strong move from King, Huffman took the sprint to claim maximum points. The result put Huffman in the lead, with 10 points against King’s 8. The day’s polka dot jersey would be decided on the final KOM of the day. Coming to the line, Huffman rolled across uncontested to claim his first leader’s jersey at the Amgen Tour of California.

Despite claiming the KOM, Huffman wasn’t done. He charged down the final descent, powering back towards Santa Clarita. On the long, rolling run to the line, the peloton, lead by BMC slowly ate into the break’s advantage. With 10 kilometers remaining the gap was under a minute with Will Barta dropping off the pace. The catch looked inevitable but Huffman and King refused to lay down arms and with a kilometer to go the gap was still at 40 seconds. In the sprint Huffman kicked first but King had the measure of him and crossed the line with arms raised. Huffman now is 8 seconds behind King on the general classification.

“I was surprised we didn’t get caught,” added Huffman. “At one point it came down to 40 seconds and then with 3 kilometers to go it went back out to a minute. At that point I knew we had it because it was all flat, downhill with tailwind. There wasn’t enough road for the peloton to catch us. We both wanted to win the stage. I led it out with 200 meters to go but Ben was just faster than me.” 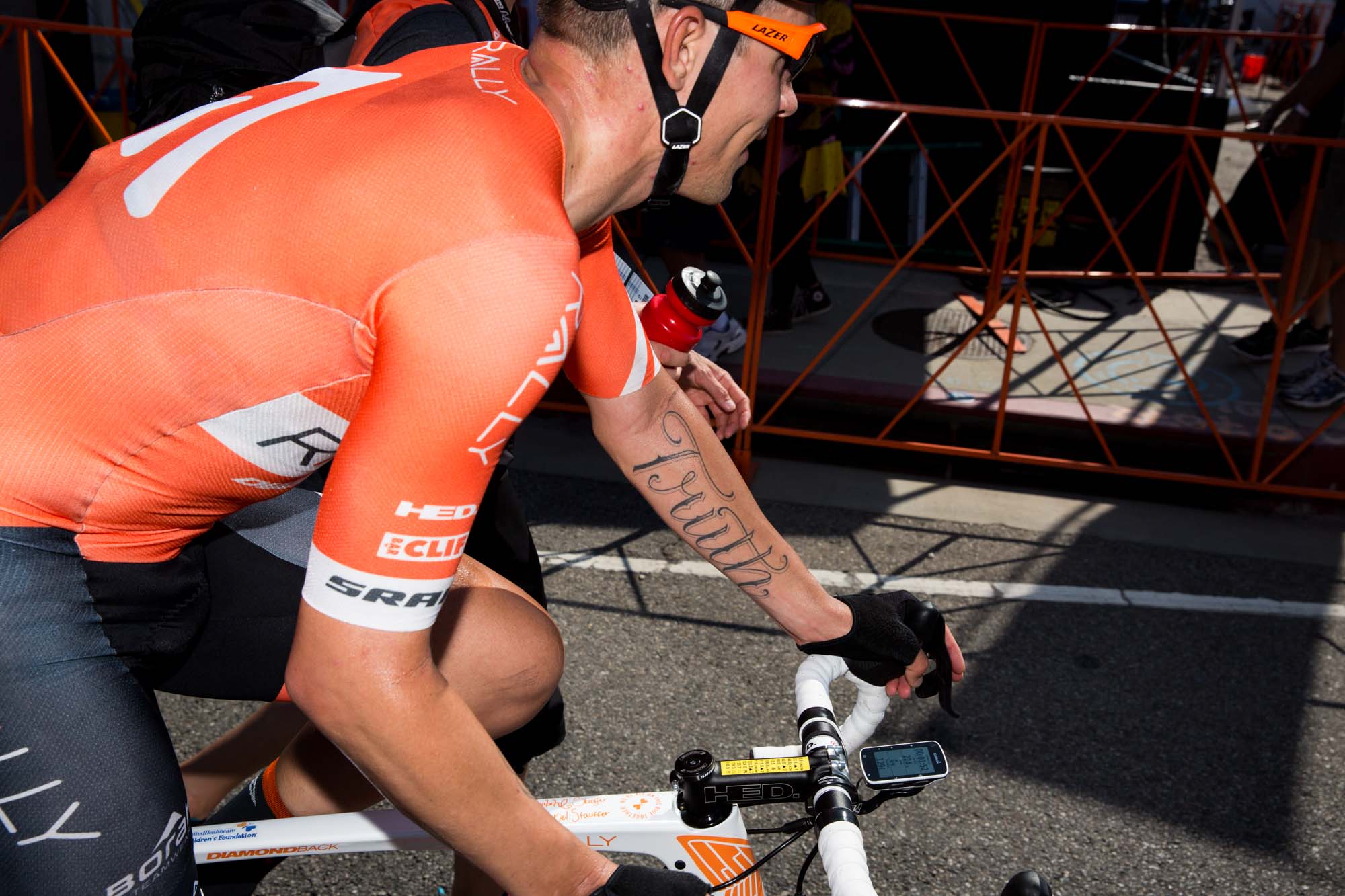 Hail to the King: Huffman Climbs the Mountain