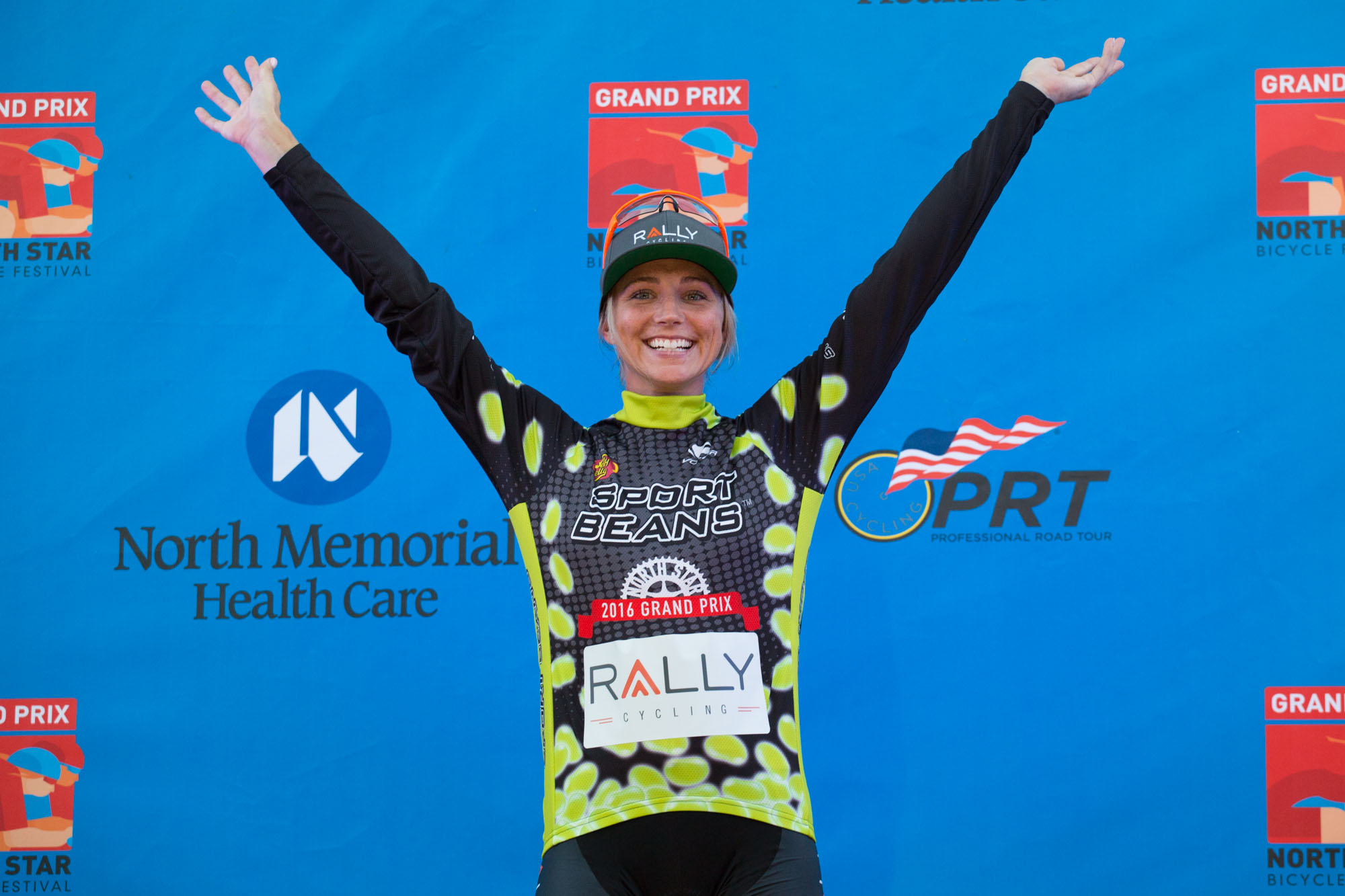 The team continued its domination of the North Star Grand Prix with Evan Huffman powering to a victory, Erica Allar claiming the Queen of the Hills jersey and Brad Huff taking the overall lead. In the stage three Cannon Falls Road Race, Huffman won after a daring, late race solo bridge to a deteriorating breakaway before outsprinting Julio Padilla (Team Arapahoe Resources) on the final kicker to the finish line. Brad Huff finished third, winning the bunch sprint behind the two escaped riders. Tom Zirbel retained the overall lead he had held since the opening time trial on Wednesday.

“It was a chaotic stage with lots of attacking” said Huffman of his win. “Finally five guys got away towards the end and had a good lead. Huff did a lot of work to bring the gap down before I saw a place to bridge across. When I made the bridge, there where only four guys left so I attacked and one guy came with me. We worked together the last couple of laps, before he jumped me in the last corner. I was able to get on his wheel, recover and then launch my sprint.”

Erica Allar showed her overall strength by claiming the Queen of the Hills (QOH) jersey out on the road before finishing third in the stage. Coryn Rivera (UnitedHealthcare) and Kimberly Wells (Colavita-Bianchi) were the only two riders to cross the line before Allar. Allar’s Rally Cycling teammate Heather Fischer crossed the line in sixth to give the team two riders in the top ten.

“I like this stage, I have been first and second here before,” said Allar after the stage. “I think I was a bit of a dark horse for this race because I haven’t raced here in so long and people think of me more as a pure, flatland sprinter. I love the difficulty level of a highly technical circuit and the opportunity that provides to separate. We rode really well together as a team, and I am happy we got the QOH jersey and are on the podium for the stage.”

In the stage four Uptown Criterium the team worked hard to set up Brad Huff for the win. As the rain started to fall in the closing laps, the race became a balancing act between speed and traction. As a result, several riders ended up on the tarmac. With five laps to go, race leader Tom Zirbel lost traction and went down. With Zirbel down it was up to Huff to keep the jersey within the team. Coming out of the final corner the National Champion was boxed in, but still put down a powerful sprint to cross the line in third – capturing crucial bonus seconds to take the leader’s yellow jersey. Crossing the line ahead of Huff was Justin Williams (Cylance-Cannondale Pro Cycling p/b Incycle) and Alfredo Rodriquez (KHS-Maxxis-JLVelo).

“I just lost my wheels with five to go. It’s not a big deal – I am fine.” said Zirbel of his crash. “Brad has the jersey so that is what is important. I knew the jersey would change hands at some point this week. The team still has it and we are in a good position for the overall.

In the women’s event the team missed the podium after its lead out train was disrupted on the final lap. Despite missing the podium, Fischer and Allar finished strong in sixth and seventh place. As important as the day’s stage results, the team came away unscathed and Allar maintained her lead in the Queen of the Hills competitions.

Injury Report
Despite it being a successful week on the results sheet, Wednesday night’s St. Paul Criterium and the Cannon Falls race was marred by several crashes in the men’s and women’s races, both involving Rally Cycling athletes. Catherine Oullette and Katherine Maine hit the deck in St. Paul in separate pileups. Maine suffered a concussion and was forced to withdraw, while Ouellette chipped two teeth (and still has one of the best smiles in the peloton). In Cannon Falls, a large crash on a long descent early in the race wreaked havoc on the men’s field. As a result of the crash, Adam De Vos and Jesse Anthony ended the day in the hospital. De Vos suffered broken ribs while Anthony came out in slightly better shape, with bruised ribs and liver.

The North Star Grand Prix continues this weekend with the Mankato Road Race on Saturday and the Stillwater Criterium on Sunday. 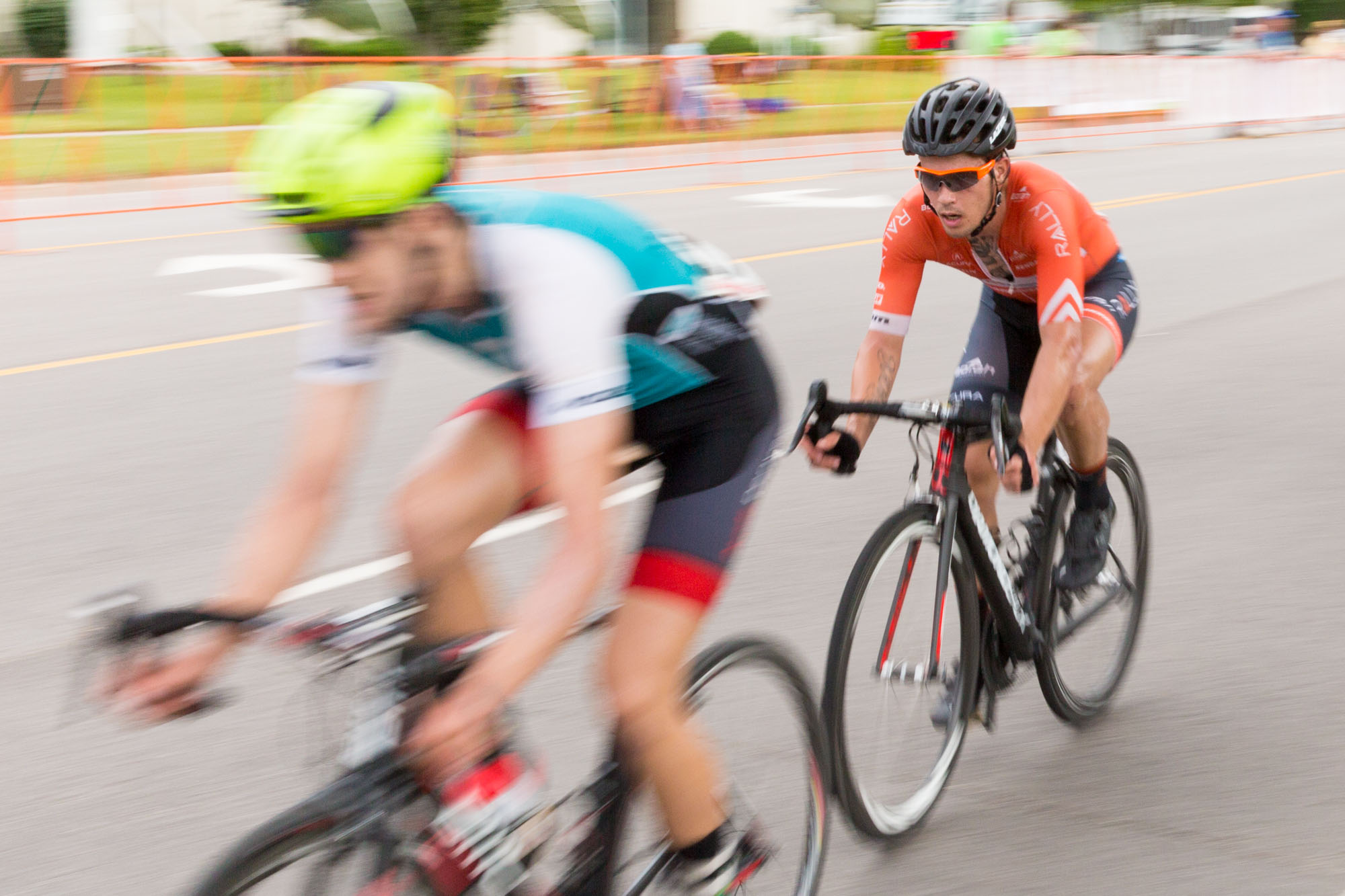 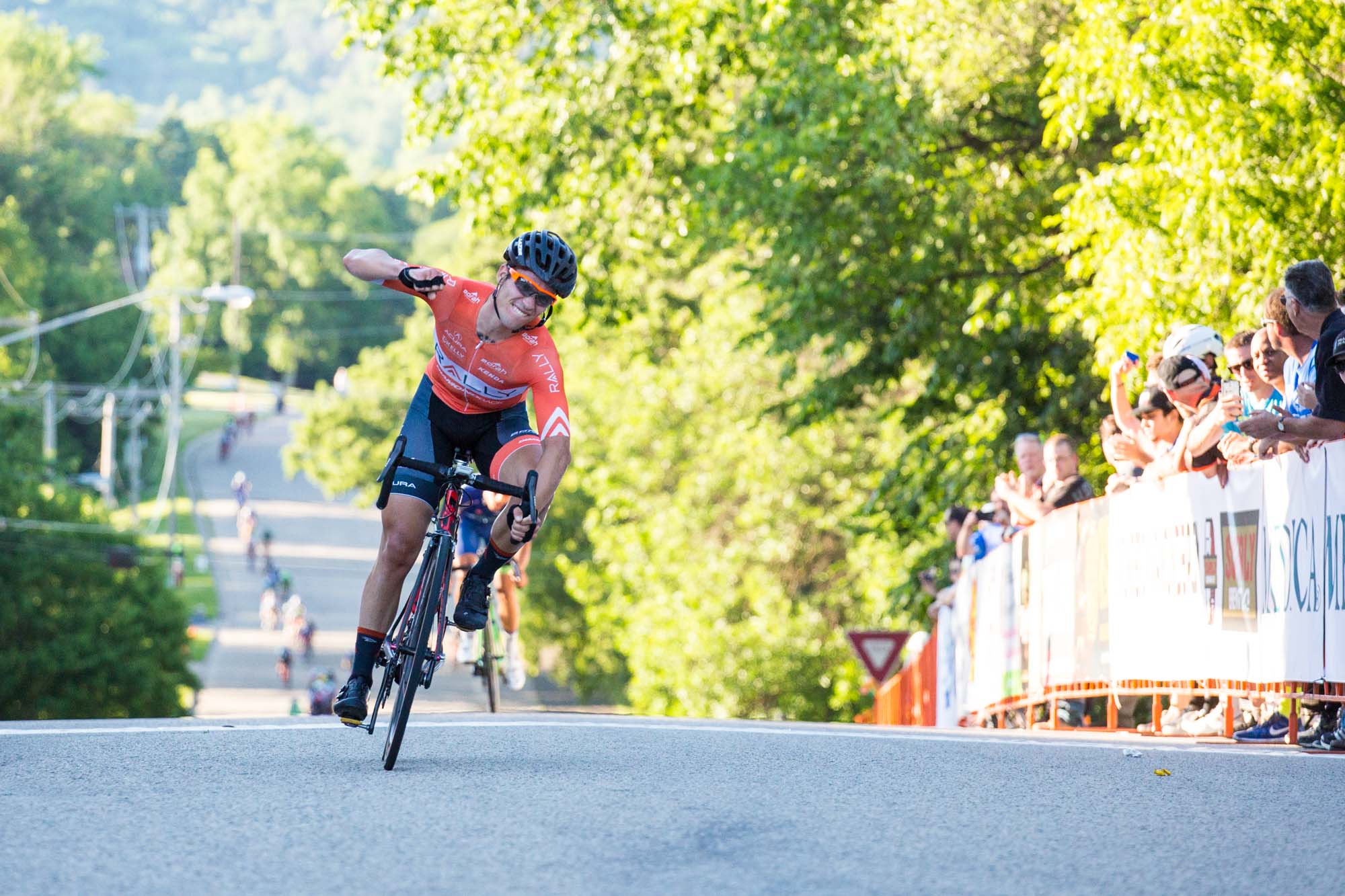